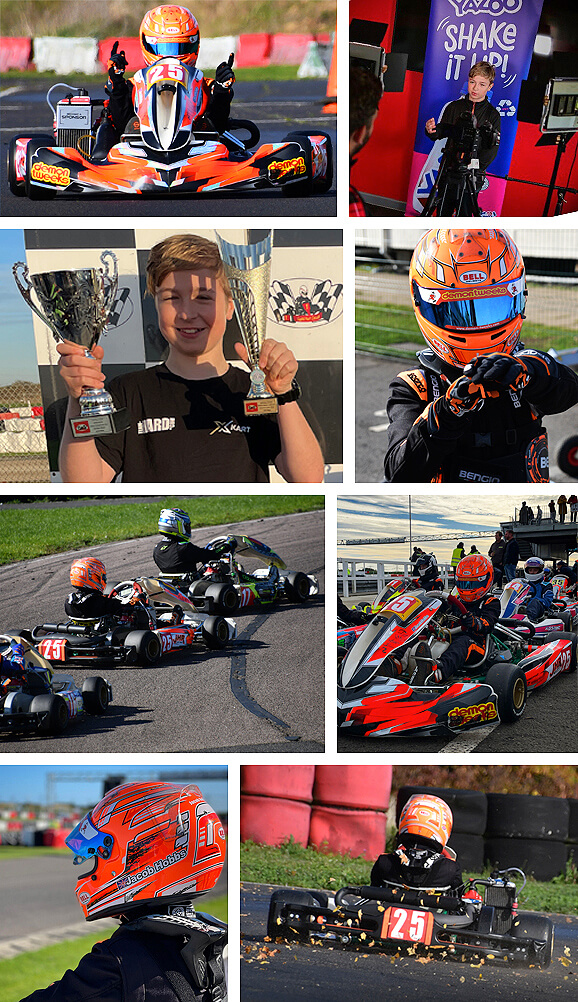 Jacob & I would like to say a massive thank you to our sponsors this year. Your contribution in our first year of racing meant everything to us and enabled us to establish ourselves as a new kart team, progress through the field much quicker than expected and to fight, and in a lot of cases, beat the big teams.

To end our first year as vice champions in the IKR Championship, Endurance Champion, hold the lap record at two circuits, have been on the podium 12 times, got through to the final 12 out of hundreds of national drivers for Team Hard Motorsport academy, received professional media training and we have even been asked if we would consider expanding our team for additional drivers. It’s been a lot of hard work, dedication, passion sweat and tears to achieve the results we have this year but it’s paid off.

In 2023 Jacob will be competing in the Super One National Karting Championship. It is regarded as the premier karting championship in the UK, producing professional drivers including Lewis Hamilton, Jenson Button, David Coulthard, Alexander Albon, Dan Wheldon, Anthony Davidson, Jason Plato, Zhou Guanyu and more.

Over the years, the Super One series has produced champions that have gone on to race in Formula 1 such as David Coulthard, Will Stevens, Allan McNish, Jenson Button, Anthony Davidson, Paul di Resta, Ralph Firman and Lewis Hamilton. Other drivers who have won a Super One championship and who have gone on to professional motor racing include Gary Paffett, Mike Conway, Dan Wheldon, Ben Hanley, Oliver Jarvis, Oliver Rowland and Billy Monger.

As you can image we are delighted to have got through to this championship and hope that this is a real upwards stepping stone in Jacob’s motorsport career.

Following on from a successful 2022 campaign, Jacob and our JHR Kart team will be competing in 4 karting championships throughout the United Kingdom in 2023 on some of the most famous karting circuits out there.

We will be competing in a total of 28 races, across 4 karting championships on 10 different circuits across the country.

JHR Kart team is completely independent and exists for the sole purpose of providing Jacob a race winning kart, enabling him to compete against some of the best drivers out there with the sole objective of getting Jacob noticed and provide him an opportunity to fulfil his dream of making it big in motorsport.

As a result we have branded ourselves fluorescent orange and black, have a full custom race livery on our race kart, custom race suit along with motorhome and trailer graphics all proudly showing our sponsors and partners.

In the Super One National karting Championship all the events are live streamed with full commentary so you can watch our progress live, karts can be required to carry on-board cameras, drivers are interviewed throughout the race weekend and the series is followed by some of the most well know teams from the motorsport world and it’s governing body is MotorSport UK.

If you would like to sponsor Jacob for the 2023 season any contribution you make would be appreciated. Every single penny from his sponsorship goes into his racing, making us as competitive as possible. We are determined, driven and passionate for 2023 to be even more successful than 2022.

If you would like to be part of our exciting motorsport journey then please don’t hesitate to get in touch. We are always looking for suitable partners to join us. We have a range of packages to suit everyone. Please fill in the form below and we will get back to you.